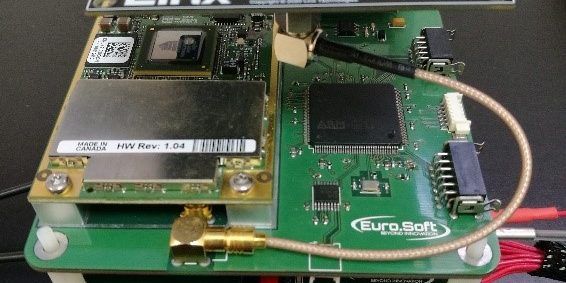 The flight unit called “Space Twitter”, conceived under the UDRAGON and MISTRAL projects, leaded by Telespazio, allows telecommunications and telemetry functions at low data rates, with constant coverage of the mission by the ground stations, thanks to an innovative concept of “low cost” ground stations. The unit can also act as “interlink” system between small satellites, exchanging i.e. data for the synchronization of the flight in formation (real-time kinematic RTK positioning: pseudorange, carrier-phase measurements and ancillary data). Space Twitter is an automatic low-speed data communication system for satellites in LEO orbit. It is equipped with a navigation subsystem, one for radio transmission (UHF / VHF) and one for data processing. Thanks to these subsystems and to the onboard software, the Space Twitter is capable of sending Telemetry and receiving remote controls in a completely automatic and independent way from the satellite that hosts it.

Euro.Soft collaborated with Telespazio in the development of a functional prototype of the entire TLC subsystem, in the previous MISTRAL and UDRAGON projects. In particular, for the prototype of the on-board unit, the OBC and Radio UHF / VHF cards have been acquired on the market, while the navigation unit has been defined at the breadboard level by Euro.Soft, starting from the Novatel core and integrating new functions. enabling the visibility algorithms of the Space Twitter. A flight unit is ready for flight qualification.

Characterised by the use of new ultra-light alloys, materials and “green” technologies, MISTRAL also integrates health monitoring systems, thanks to sensors inserted in critical parts such as the deployable heat shield, whose opening can be modulated for active control of the re-entry trajectory. In addition, a micro-platform management system called ‘Space Twitter’ allows the capsule in orbit to automatically and continuously send ‘tweets’, i.e. short messages, to communicate its operational status to a series of dedicated ground micro-stations.

Apart from its use as an “interlink”, as regards communications to the ground, the Space Twitter can be used as:

This Operative Mode “Automatic Communication” relates to the use of all Space Twitter functions. In particular:

In the transponder and Automatic Communication operating modes, the Twitter Space performs the processing of the visibility algorithm.