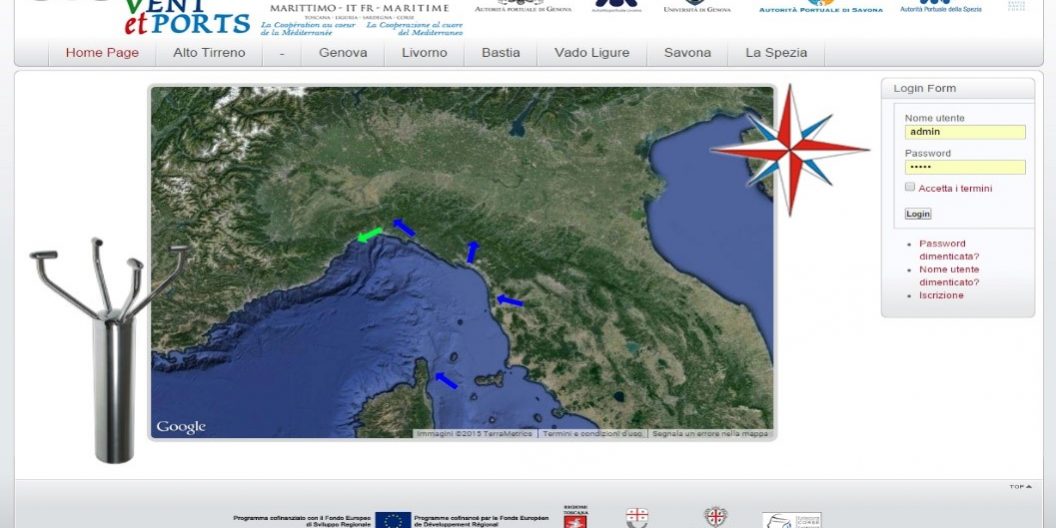 The “WIND AND PORTS” project aims to contribute to improving the safety of people, vehicles and structures in all operational areas of the port, on land and on the water surface: areas exposed to very strong winds that can entail situations of considerable risk for the physical integrity of those who work, for the solidity of structures, the stability of vehicles, stored goods and for vessels being docked.

The monitoring system consists of anemometric stations for the continuous measurement of wind intensity and direction at specific points of interest for the safety and management of the activities taking place in the port area, and a centralised system for the acquisition, storage and publication of the data measured by the anemometric stations.

Each anemometer station consists of an ultrasonic sensor, which measures the intensity and direction of the wind, and a local data acquisition and storage system based on the “WTU” system. Each sensor provides: temperature, wind speed and measurement reliability. Each sensor has been positioned at a certain height above ground level, usually by means of a high stainless steel pole. Each station is powered by a connection to the electrical distribution network and is covered by a UPS device. Finally, the station is equipped with a data transmission system through direct connection to the Port Authority computer network.
The data from the anemometric stations are transmitted to the central acquisition system where they are stored in a special database accessible by the user from local or remote locations via web. The monitoring GIS system manage 5 ports in the north Tirrenian sea, in Italy and Corse.

As an example, follows the description of the 5 local stations in the port of La Spezia.

The anemometer station indicated as Survey Station No. 1 (Harbour Master’s Office) is located on top of the roof of the Harbour Master’s Office building. The anemometer sensor is positioned at a height of 6 metres above the roof level of the building so that it is not affected by the presence of roof structures. The site can be reached directly from the internal access of the building.

The anemometer station indicated as Survey Station n.2 (Molo Garibaldi) is located on top of the roof of the former Port Authority office building at the root of Molo Garibaldi. The site can be reached directly from the internal access of the building.

The anemometric station indicated as Survey Station No. 3 (Porto Lotti) is located on top of the pier in the Porto Lotti marina. The anemometer sensor is located on the existing turret where the red light is positioned. The site can be reached directly on foot and by vehicles after requesting authorisation.

The anemometer station indicated as Survey Station No. 4 (Castellana) has been mounted on the south side parapet wall in the area inside the Castellana military zone. The anemometer sensor has been positioned on a 6-metre high pole. The site can only be reached by vehicles after requesting permission.

The anemometer station indicated as Survey Station n.5 (Santa Teresa) is located in the Baia Blu area of Lerici. The anemometer sensor is positioned on the existing of a cottage. The site can be reached directly on foot following a request for authorisation.